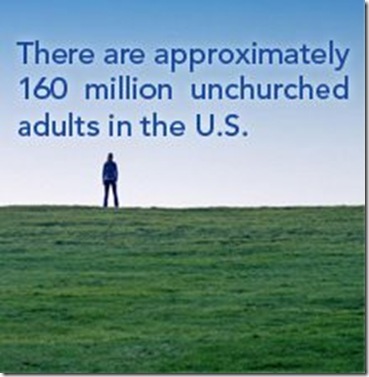 Since 1990, the percentage of unchurched adults in America has risen from 30% to 43% of the population. -Barna Group

I think we “churched” in America see these stats and gasp with shock and horror as we mutter how our country is going to hell in a hand basket.

Religious tradition is out of the way.

We don’t have to worry about those conversations that we try to get to the biblical Jesus being derailed by our beliefs about predestination, faith and works or the depravity of man. The unchurched don’t know and don’t care about doctrinal intricacies.

The generation that sees their way isn’t working.

We have lived the consequences of the sexual revolution, the destruction of family and the me generation. More and more people are waking up to the reality. It isn’t working.

They know they don’t have Jesus.

Too many churched people are living under the delusion that they know Jesus, even if the fruits of their lives aren’t proving it (Matthew 7:16). Convincing them that they need Jesus when they think they have him is a vain battle most of the time. The unchurched know they know they don’t have Jesus. Some have been proud that they don’t have Jesus. No convincing has to be done. Just introductions to the Savior.

After that generation died, another generation grew up who did not acknowledge the Lord or remember the mighty things he had done for Israel… They abandoned the Lord, the God of their ancestors… Then the Lord raised up judges to rescue the Israelites…  For the Lord took pity on his people, who were burdened by oppression and suffering. (Read all of Judges 2 here.)

We are living in that time. We are living in a time that the generation does not acknowledge the Lord or remember the mighty things he has done. They have abandoned the Lord. But that isn’t the end of the story. That Lord is raising up judges among us to rescue them. The Lord is sending you.